David, I suggest a video here, you giving a spiel about the whole rationale behind this. Obviously I can add various graphics etc etc and splice it. Could look really good! 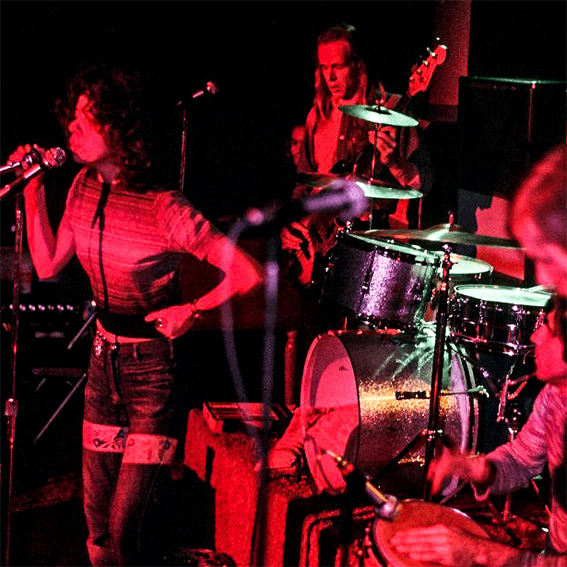 Zephyr the band will always be overshadowed by their original guitarist, Tommy Bolin. He found fame in the James Gang and Deep Purple, and Zephyr’s place in the canon, to most rock fans, is as the springboard for his talents. Their first album sold 100,000 copies and still stands as a unique piece of heavy metal history. The combination of Bolin’s robust but tasteful guitar playing (on songs almost all in the 6/8 time signature) and Candy Givens’ histrionic, even more overpowering singing makes ZEPHYR unlike any other metal album of the 60s. The record is spotty, mostly because Candy is uncontrolled and often unhinged. Half the time her voice is stunning, as in the opening “Sail On,” but the other half of the time it’s strident. Her obvious talent is not balanced by “taste.”·
‍
The second album, GOING BACK TO COLORADO, an attempt to add some complexity to Zephyr’s sound, softens the heavy metal edge, and it sold poorly. It’s even spottier than the debut, but includes some interesting experimentation that foreshadows their future. Bolin left after this album, and many don’t even know that Zephyr continued on as a band. Theoretically, the 1972 release SUNSET RIDE would be nothing but a footnote in the history of a well-known guitarist, an album to be filed with the Doors’ OTHER VOICES and the Velvet Underground’s SQUEEZE. Indeed, SUNSET RIDE’s continued obscurity shows that critics and public alike dismissed it without listening to it. (It is housed in one of the ugliest sleeves ever, possibly another reason the album fell under the radar.) What a surprise, then, to discover the brilliant album it is.
‍
Obviously the departure of Bolin liberated the band, and with SUNSET RIDE, the husband/wife team of Candy and David Givens truly came into their own as songwriters. Since the songs no longer needed to be structured to accommodate long guitar solos, the songwriting became impeccably tight. The experimentation on this album is entirely structured and intentional, the exact opposite of the kind of improvisation that passes for heavy metal “innovation.” The more refined and intricate song structure also works miracles with Candy’s singing. Gone is the wailing and screeching, most of which took place during and around Bolin’s solos when Candy obviously didn’t know what else to do. Here her voice is 100% under control. It’s a thing of beauty and power, potential completely fulfilled. New guitarist Jock Bartley’s jazzy but unobtrusive style and undistorted sound is a perfect fit for the songs. This is blues-rock, but it lacks the musical cliches of traditional blues. The production, which puts the percussion high in the mix and the guitar and voice low (the exact opposite of the first album) adds an eerie, late night feel; there’s no question that the ‘sound’ of this album is as effective as the songs. The overall vibe is that of Candy struggling to the surface from a not-so-happy hole she’s found herself in. The end result is a positive one: wasted energy being trumped by creativity. The upbeat songs are filled with longing; the downbeat ones filled with hope.

Moments like the raveup at the end of “Moving Too Fast” are intensely powerful, and lyrics like “I’ve been smokin’ hash/talking trash/wishing things weren’t real” have a sense of tragedy. This album has the kind of indefinable magic of a true masterwork.
The album itself is as perfectly structured as the songs within. Side one is relatively straightforward, developing the new style confidently but safely. “I Am Not Surprised” and “Moving Too Fast” brim with understated energy, “Someone To Chew” with sexual passion. “No Time Lonesome,” which has all of the heartbreak of a Hank Williams song, features a lovely, unexpected violin break by Bobby Notkoff, known for his work with Neil Young. On side two, the song cycle goes completely haywire, with each song being more experimental than the previous. Brilliantly, as strange as the songs are, they’re organized in a way that creates a perfect flow. “Sold My Heart” begins the side in understated (but lovely) fashion. Its mild country leanings are absorbed into the warped psychedelic country rock of “Sierra Cowgirl.” The following “Chasing Clouds” dispenses with the country and is pure downer psychedelia. Candy’s voice is almost buried beneath the heavy tremolo of the organ and the overwhelmingly loud cymbals. It feels like a windstorm many levels beyond the gentle breeze of the band’s name. Toward the end, a backwards guitar appears, moving the listener from this storm to one even more mysterious. The effect of floating in the sea, no destination in sight, is even more pronounced on “Sunset Ride.” It’s a wordless tone poem that anticipates the repetition and fade-in/fade-out structure of Brian Eno’s “Here Come The Warm Jets” and “Taking Tiger Mountain By Strategy.” The turn towards art-rock completes itself with the free-form introduction to “Winter Always Finds Me,” which could have been pulled from the weirdest parts of Kevin Ayers’ “Shooting at the moon” album. When the song itself kicks in, it merges blues and jazz and brings the album to a breathtaking conclusion.
‍
SUNSET RIDE combines startling performances, unique production, and amazing precision. While it’s instantly melodic and appealing, it takes many listens for the overall brilliance of this album to fully reveal itself. Sit back and feel it a few times, then really start to listen closely. It may seem absurd to think that a very American band who started out as heavy metal and gravitated to blues and jazz could be legitimately compared to Eno and Ayers, but like all works of genius, SUNSET RIDE defies categorization. If there’s anything here to criticize, it’s the inclusion of the much-covered “High Flying Bird” on side one. Zephyr’s rendition is fantastic, fits nicely in the context of this album, and gives Candy her best chance here to belt it out. Nonetheless, given the strength of Zephyr's own songwriting on this album, a song we’ve heard by dozens of other artists is a mild letdown, probably enough to keep the album from being “perfect.”
‍
Like Bolin, Candy Givens would die young, about ten years after the release of this album. It’s sad that Zephyr didn’t produce an immediate followup, but it’s hard to imagine that they could have. By the time SUNSET RIDE ends, they seem completely spent. Despite the lack of product, Candy and David Givens stayed musically active for years. They reunited with Bolin for some concerts and even released a mildly inspired new wave-styled album under the Zephyr name in 1980. Nonetheless, SUNSET RIDE is their real swan song. It doesn’t have the same air of doom and foreshadowing as pre-death albums like Joy Division’s CLOSER or Badfinger’s WISH YOU WERE HERE, but it does have the feel of artists who are going through great pain and turning it into beauty. Candy’s ability to express this feeling without words in the title track is almost awe-inspiring. Her legacy lives on with SUNSET RIDE.