A VOLCANO OF DREAMS

... a life slowly fading
has erupted and blown up the night
and living or not
I must go on sailing
and try to escape from the light...

Zephyr was a blues-based hard rock band formed in 1969 in Boulder, Colorado by Candy Givens (vocals and harp), David Givens (bass), Tommy Bolin (guitar), John Faris (keyboards) and Robbie Chamberlin (drums). Although the charismatic performances by Candy Givens were originally the focal point for the band, it was the flashy guitar work of Tommy Bolin that the band is best remembered for. After Bolin left, he was replaced by Jock Bartley, and the band recorded the album Sunset Ride, their second for Warner Brothers Records. The album is still in print and is much loved by a small but loyal following.

On Sunset Ride, Candy Givens displayed her gifts as a singer, composer, and harmonica player. The album was produced by David Givens who also authored the majority of the tunes. As a result of his stint with Zephyr, Bartley went on to a successful career with Gram Parsons and Firefall and drummer, Michael Wooten, went on to play for several years with Carole King. Various versions of Zephyr continued to play in Colorado until Candy's death in 1984.

The release of "Heartbeat" in 1982 was promoted by a video that incorporated very early examples of analog computer animation combined with live action.Other Zephyr members of note include trance blues maven, Otis Taylor, who played bass during the mid-1970s, Kenny Wilkins (Drums) and also later on as (guitarist), guitarist Zack Smith (founder of Columbia Records band Scandal), and blues guitarist, Eddie Turner, who played guitar in the last incarnation during the early 1980s.

There are some exciting upcoming releases...
Some extremely rare early live footage being just one such gem...

The 4 albums shown below are the official/original releases during the band's career.
The first 3 have all been remastered and re-released in various forms, click on each for details. 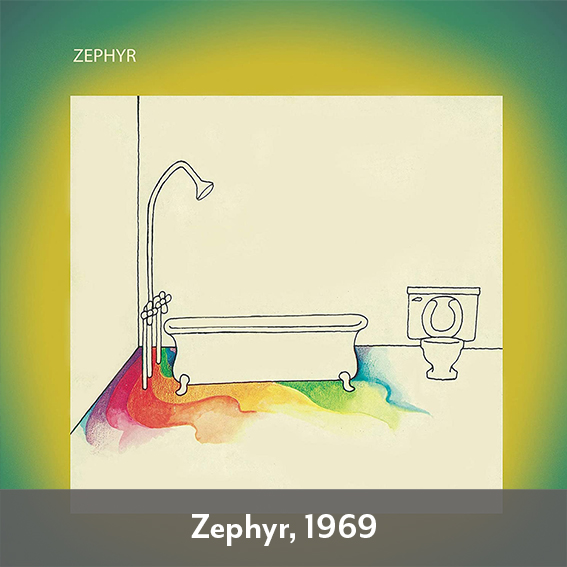 David, I will include Art's Bar & Grill Album here..